It's time to pop the Champagne! After six months of querying more than 1,000 in-the-know social authorities, including journalists, philanthropists, not-for-profit fundraisers, social luminaries, event planners, and cultural and business leaders from coast to coast, we are proud to announce the 2018 Salonniere 100, our annual list honoring America’s 100 best party hosts. The 2018 Salonniere 100 spotlights honorees from 34 cities and 28 states in the United States and represents a diverse and brilliantly creative group of men and women who share one common trait: an exceptional ability to leverage the power of parties to enhance the lives of others.

“From prehistoric times to the era of the French salonnieres—the social influencers of their time—to today, parties have always played a pivotal role in human civilization,” said Carla McDonald, The Salonniere‘s founder and editor in chief. “The Salonniere 100 is our way of honoring those who are continuing the tradition of hosting parties with a purpose. Whether they’re welcoming guests to support causes, advance ideas, unite people, or simply bring joy to others, the Salonniere 100 honorees are America’s most gifted and influential cultural connectors.”

Among those making the Salonniere 100 for the first time this year are:

Artist Amy Virginia Buchanan and entrepreneur Patrick Janelle, who host wildly imaginative dinner parties in unusual places with the goal of building America’s creative culture (New York, NY)
Kiyomi Buker, social secretary to the Ambassador of Japan, who relies on the Japanese idea of “ichigo, ichie,” meaning “one time, one meeting,” to inspire her parties (Washington, DC)
Heidi Klum (New York, NY) and Cindy Crawford and Rande Gerber (Los Angeles, CA), whose annual Halloween celebrations have become two of the country’s most coveted party invitations
Solange Knowles, Grammy-winning singer, songwriter, model, and actor, who is known for throwing “sexy parties with a super-cool vibe” (New Orleans, LA)
Reese Witherspoon, actor, producer, and entrepreneur, who infuses all her parties with southern charm and has become known as one of the nation’s most gracious hostesses (Los Angeles, CA)

Among those making a return appearance on the Salonniere 100 are:

Natanya DiBona, co-host of Philadelphia’s Dîner en Blanc, who has turned the international flash-dining phenomenon into one of her city’s largest social events (Philadelphia, PA)
Interior designers Ken Fulk (San Francisco, CA), Alessandra Branca (Chicago, IL), and Bunny Williams (Hartford, CT), who are known for the breathtaking environments they create for their parties
Lela Rose, fashion designer, whose attention to detail when entertaining—including matching the cocktail napkins to the cocktails—is unrivaled (New York, NY)
Dana Marie Roquemore, founder of The Dinner Party Project, whose events encourage strangers to meet new friends outside their social circle (Orlando, FL)
Oprah Winfrey, media mogul and philanthropist, whose warm and down-to-earth hosting skills are legendary (Santa Barbara, CA)
With that, we are proud to raise our glass to the talented men and women who comprise the 2018 Salonniere 100:

The Salonniere 100: 2018
Honorees are listed alphabetically according to the most frequently cited nominees from each city. Only cities with a sufficient number of nominees are included. The nominees most frequently mentioned were reviewed by The Salonniere team to compile the final list. A special focus was placed on those who entertain with enthusiasm, creativity, passion, and flair. Party planners and other event professionals were not eligible. 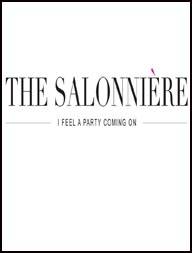 “Design industry luminaries Carolyne Roehm, Bunny Williams, and Timothy Corrigan, are taking their place alongside celebrities like Heidi Klum, Oprah Winfrey and Solange Knowles on the Salonnière 100, a list of America’s top 100 party hosts. The list celebrates honorees from 28 states and 34 cities for their “exceptional ability to leverage the power of parties to enhance the lives of others.””