This tremendously successful partnership, now in its sixth year, launched the concept of a high-design backstage haven for celebrity talent, befitting one of the biggest nights in Hollywood. The room is built from scratch, transforming an industrial backstage area into a luxuriously appointed space.

“We wanted to support the Television Academy’s and FOX’s environmental efforts by producing a greenroom with the aesthetic you would expect from the magazine, but that is also eco-conscious,” said Giulio Capua, vice president and publisher, Architectural Digest.

“Timothy has an incredible talent for bringing disparate elements together to create a space that demonstrates how compatible elegance and environmentally-sound design can be so elegant that one would never expect it was designed with the environment in mind,” Capua explained.

“This year’s Architectural Digest greenroom is inspired by an English country living room, combining 18th-century antiques with the latest TV technology,” Corrigan described. “These influences mix with a casual California attitude and eco-friendly elements to round out the form and functionality of the room.”

For the first time, the Architectural Digest Greenroom will be green both ecologically and in color, with various shades used throughout. The room’s wood-paneled walls are being constructed with reclaimed wood from a local California high school football stadium, and all textiles are made with 100% natural fibers.

Presenters will watch the onstage action on the greenroom’s Sharp AQUOS Liquid Crystal Televisions; the company is at the forefront of eco-consciousness, from the elimination of PVCs in manufacturing to its award-winning “Super Green Factory,” which will completely offset its production of greenhouse gas emissions by the year 2010.
Some of the key design features:

This year's 59th Primetime Emmy Awards marks the sixth consecutive year that Architectural Digest will design the greenroom in which celebrity presenters make their final preparations before heading onstage.

Each year, a talent from the prestigious AD 100, the magazine’s list of the top 100 designers and architects, is commissioned to create this temporary sanctuary that serves as the primary gathering spot backstage for both rehearsals and the awards show telecast.

Design concepts featured in the Architectural Digest Greenroom at the Primetime Emmys in the past include a 1920s Hollywood bungalow; a Spanish Colonial Revival with Mission-style furnishings; and a mid-century modern look channeling Case Study homes built in Los Angeles in the 1950s. Visit www.archdigestgreenroom.com for complete details and photos.

About the Academy of Television Arts & Sciences
The Academy of Television Arts & Sciences was founded in 1946 just one month after network television was born. It is a non-profit organization devoted to the advancement of telecommunications arts and sciences and to fostering creative leadership in the telecommunications industry. In addition to recognizing outstanding programming through its Emmy® Award, the Television Academy publishes Emmy® Magazine and stages many industry-related programs, services and year-round events for the television community.

About Architectural Digest
Architectural Digest is the world’s definitive design magazine, reaching an audience of 4.7 million readers each month. The magazine features the work of world-class authors and photographers and regularly presents a “first look” at the homes of leaders in the fields of entertainment, fashion, business, society and the arts.

About Timothy Corrigan
Timothy Corrigan is a member of the AD 100, Architectural Digest’s top interior designers and architects. With a client list that ranges from European royalty to Hollywood's biggest stars, Mr. Corrigan is known for his ability to create elegant spaces that are equally comfortable and have an environmental consciousness. Timothy Corrigan has offices in Los Angeles and Paris. Please visit www.Timothy-Corrigan.com.

For additional press information and resources concerning the 59th Primetime Emmy Awards or the Academy of Television Arts & Sciences, please direct your inquiries to Robin Mesger of the Lippin Group at (323) 965-1990.

Press Contacts
For the Architectural Digest Greenroom at the 59th Primetime Emmy Awards: 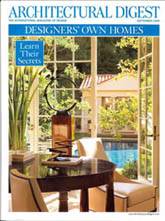