Antiques should be incorporated into every home; they add character, retain their value and are the ultimate way to recycle, said interior designer Timothy Corrigan.

"You can create an exciting environment with antiques," he said.

Corrigan, who was the guest speaker at this month's First Friday event for interior designers and others in the furnishings industry at the Las Vegas Design Center at World Market Center, said incorporating antiques into his designs has been one of the key elements of his success.

He said there are two major misconceptions about antiques that prevent many people from considering ways to use them in contemporary decor.

"It's all part of the education process," he said, adding that it is crucial for designers to show their clients how the benefits of purchasing an antique outweigh the disadvantages.

"Antiques really are unique, one-of-a-kind pieces. With reproductions, you run the risk of seeing the same piece elsewhere."

He also said that antiques don't have be used in the same way for which they were originally designed. An old dresser can be transformed into a bathroom vanity or an armoire can become a bar, Corrigan said while showing a picture of an antique bench that he transformed into a coffee table. He recommended that designers routinely scout auction houses for pieces to incorporate into their work. He also suggested that designers not be afraid to mix decorating styles, periods or materials.

"If you do, you get a stuffy uptight look that nobody wants to spend any time in."

Creating a comfortable, livable environment is another of his signature elements.

Corrigan said he strives to create a state of comfortable elegance no matter who he is designing for or where his work will be. His clientele includes everyone from celebrities to European royalty, and he has created interiors for apartments, estates and ski lodges as well as jets and yachts.

"I strive for rooms that don't look decorated. I want them to feel as if everything just fell naturally into place."

More than just a look, Corrigan said comfortable elegance is a state of mind that allows people to feel at home and welcome. Key to his style is creating interiors that are timeless and sophisticated yet warm and approachable.

He wants his clients to be able to use the rooms he designs, so he fills them with high-quality furnishings with durable finishes. For example, upholstery often features outdoor fabrics, even if they will be used indoors, while wooden tables are covered with a marine varnish so they can be used on patios without fear of the elements damaging them.

Corrigan, who has offices in Los Angeles and Paris, has been named to Architectural Digest's top 100 architects and interior designers as well as the Robb Report's top 40 designers.

Interior design is Corrigan's second career. He started dabbling in design while working as an executive for a large advertising agency. While he was president of the firm's international division, he bought a 17th-century manor house in Normandy and began restoring it. After numerous friends asked him for help with their homes, he discovered he was enjoying his part-time, night job more than his day job and switched careers. 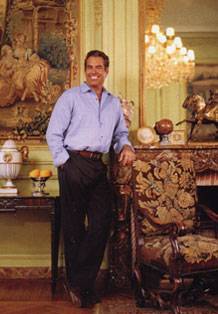