By the looks of things, nothing beats a good old-fashioned book.

That stodgy throwback manages to persist in the most tech-savvy homes -- but not always in the way it was originally intended. Under a vase, topped by glass or lending textural depth to a wall, books have become part of the decor.

"My view is you almost can't have too many books because just from the pure physical standpoint they give a home so much more depth and dimension," says Timothy Corrigan, an internationally renowned interior designer, who's regularly called on to create dedicated libraries or studies for his wealthy and celebrity clientele.

Corrigan, who is based in Los Angeles and Paris, is often asked to fill the shelves, as well.

For those short on books but serious about collecting, there are companies that will build a library of rare out-of-print and first-edition books around your interests at a cost few people can afford.

The more affordable option is buying random books by the foot or the yard. Sure they're printed in Danish, French and German but many people decorating with books aren't reading them anyway, Corrigan says.

"Honestly," he adds, "most people are only concerned with the look."

Bulk books are ideal because they're typically coordinated by color, size, style, weathering and binding material.

Marci Christensen runs Book Decor (www.bookdecor.com), a company in the San Diego area that imports 18th- to 20th-century leather- and cloth-bound books from Denmark. She then sells them to interior designers, set decorators, window dressers and directly to homeowners.

"I've had calls from doctors wanting anything on medicine for their offices," she says. "They don't care if they're in a different language because the books are only there as decoration. They're like another piece of art."

Decorating with books is more than simply lining shelves or stacking them onto the coffee table.

Corrigan recalls designing an Old World-style library for a client with a large collection of books of different colored bindings and sizes. He layered the shelves with the books and different decorative objects and then hung a picture off the front of the bookcase.

A matching lectern was placed nearby to offer yet another surface for displaying the collection.

"It makes it a more interesting space," Corrigan says, adding "Walls of books on their own are actually a little boring."

No room for a bookcase?

There are companies that sell only book bindings for those who want to create the illusion of a built-in bookcase or hide a secret storage space behind a false book panel.

But faking it with real books can work too.

"We did a dining room that's coming up in Architectural Digest where only one side of the fireplace had bookshelves, and we didn't have room for full bookshelves on the other side, so we built a false bookcase," Corrigan says. "We bought real books and just cut them on a saw so that they were only 2 inches deep because we only had enough room for 2 inches."

In a superhero-themed office, he created a hidden door in the bookcase with real books and characters on the shelves to hide another client's world-class collection of comic books.

But Corrigan says the most popular use for books in

the home is on coffee tables.

From a decorative standpoint, horizontal book stacks create raised surfaces on which to display objects such as flower vases, decorative boxes and sculptures at different heights.

"I have to admit that for novels I have gone to iBooks, but I still buy coffee table books by the dozen," Corrigan says. "For design and gardens and things that are visual, there's nothing like books." 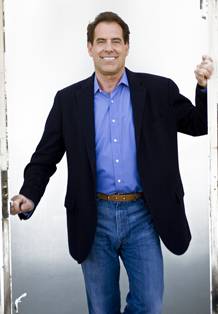 “My view is you almost can't have too many books because just from the pure physical standpoint they give a home so much more depth and dimension . ”